So far we have received numerous questions on the title of our exhibition ‘When is Space?’ Many have expressed over its strangeness. At the outset, the grammar doesn’t seem right, rather misfitting. “What does it mean?” or “It doesn’t sound correct” are immediate responses that we hear as one dwells on the title. The curators’ explain that ‘When is Space?’ is a shortened version of their original question “What does it take for space to happen?” which was further edited to “When does space happen?” In borrowing a poetic license and provoke further into the question of space, the title was eventually shortened and finalised to “When is Space?”

The matter however, does not end there. One of the prerogatives of exhibiting in a State funded public gallery was to translate all content into a regional language. Thus we were obliged to get all exhibition literature – including the title, curatorial note and project descriptions translated into Hindi for local audiences. Our Hindi translator and expert Sveta Sarda struggled and thought for some time until the Hindi title was fixed to be “Kab Bani Jagah?” Two immediate questions raised over this title within the curatorial team were: first, whether “bani” was the correct tense for the question being evoked in the English title. In Hindi, it would be categorized into a past prefect tense. Second, and a more evident gap pointed out was whether the accurate translation of “space” in hindi should be “jagah“? To be sure, “jagah“, most hindi-and-english thinking/speaking audiences would agree and understand as “place”. Thus, to them, the two titles become further devious.

There is no direct translation for “space” to mean exactly itself in Hindi. We did not mean to point at the “antariksh” which means the “universe”; neither “aakash” which means the “sky” or even “avakash” which may mean somewhere between “space” and “time”. A rather interesting suggestion by Google translate is “pause” or “break” or something that hints at the space between moments in time. Through such an exercise, we do begin to understand that the concept of space could locate itself between these meanings. However, we know that these do not overlap totally with the idea of “space” that we refer to in discourses of architecture. But does that mean that our ancients, who spoke another language, did not have any conception of “space”? Or did we not have any idea about architectural thought? In what language was space conceived and how does one reconcile this gap?

In a mediation on the gap between “space” and “place”, German philosopher Martin Heidegger introduces us to the Aristotelean the idea of topos, i.e., place-space, and goes on to argue a probable distinction and relation between the two. He asks:

“…Art and scientific technology regard and work upon space toward diverse ends in diverse ways.
But space — does it remain the same? Is space itself not that space which received its first determination from Galileo and Newton? Space — is it that homogeneous expanse, not distinguished at any of its possible places, equivalent toward each direction, but not perceptible with the senses?
Space — is it that which, since that time (Newton), challenges modern man increasingly and ever more obstinately to its utter control?”

The above excerpt suggests that our present understanding of space only dates back to when it was first historically conceived in the methods of modern scientists. These conceptions were made with a specific purpose and have come to mould subsequent world in distinct forms. For example, the formulation of Euclidean space resulted into specific conceptions of space, whereas the Cartesian logic was devised in order to establish three dimensional coordinate geometry, that has resulted into the prevailing building forms we see around us today. These ideas are fast being challenged in new algorithmic and computational logics. Heidegger provokes us to question the apparatus within which the formulation of our world within a given ideology of space may be limited. “Place”, on the other hand, he explains, is the demarcation of the “region” between the object and that which it is contained in. Thus, for Heidegger, ‘place’ is the specific way in which space is configured by means of embodying it.

Heidegger’s inquiry helps address the question within the exhibition title on two fronts. Firstly, it states that space is a historical fact — its determinants can be located in time, and it is these forces that have created specific orientations of our thoughts and actions within the world today. Secondly, it speaks to the notion of “jagah” – the closer translation of “place” – by establishing its relationship to “space”. In its translation as “jagah” – we are constantly reminded of the limits of conception of space itself. It is similar to how scientists would mobilize the term “infinite” or “infinity” to mean an idea or particle outside the sphere of understanding or influence respectively within a given apparatus. Thus, jagah not only refers to the specific ways in which spatial relationships are structured, and are made amenable by us through our own pursuits, but also that these are merely provisional within the given schema or ideology of space that is available to us.

The seemingly unresolved question implicit within the title ‘When is Space?’ indicates the incompleteness of our knowledge of space/place itself. It is a reminder for architects and all practitioners of space that their role in processes of space making is integral in opening up new vectors and that it is up to them to integrate the question of space within their everyday practice. 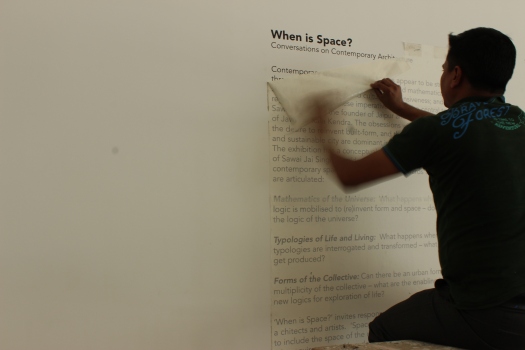